Fertilizing streams to save salmon?

It’s not often I read a technical report that’s jaw-dropping, but this one sure was. It’s the Fraser Valley Stream Nutrient Enrichment effort, where they’ve been adding phosphorus fertilizer to salmon-bearing streams. Much of my work focuses on keeping excess phosphorus (and nitrogen) out of lakes and streams — and here’s a big effort dumping it directly in?!? What’s up with that?

I think a lot about too much nitrogen and phosphorus polluting lakes and streams. Nitrogen and phosphorus are two of the main nutrients in fertilizer — and when excess nutrients get into lakes and streams, they fertilize the algae there, which grow more. A lush, green lawn is a healthy lawn, but a lush, green lake, covered by an algal bloom, usually evokes the term “scummy.” Algal blooms have a number of noxious effects: reducing water clarity and dissolved oxygen levels, causing the loss of desirable species, and sometimes even producing toxins that make it unsafe to drink or swim in the water (recall last summer’s drinking-water ban in Toledo, Ohio due to an algal bloom). Healthy lakes and streams are generally clear waters, with lower nutrient concentrations and less algae. 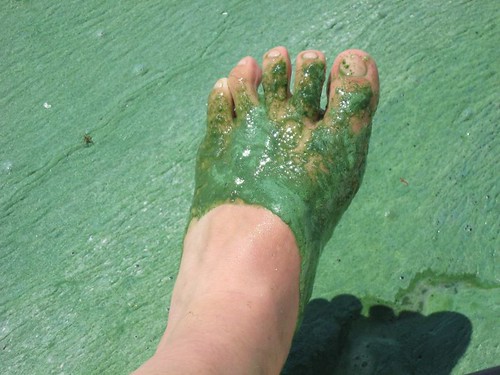 But like many things in ecology, it turns out there’s a Goldilocks Zone. Algae are the base of the aquatic food chain, and too little nutrients can also hurt fish. These particular streams receiving fertilizer addition are presumably not ones near much agriculture, development, or other human nutrient-adding activities. What has happened to them is that dams and fishing have seriously reduced the adult salmon coming upstream to spawn. When adult salmon spawn and die, they fertilize the stream (and since many are eaten by land animals, they also fertilize the surrounding area). The upstream migration of nutrient-rich salmon has been severely reduced for a long enough time that the streams have actually become depleted. There aren’t enough nutrients to feed the algae, so not enough algae to feed the zooplankton and insects, and so not enough of those smaller critters to feed growing salmon. It makes sense in retrospect, but it’s so counter to my usual paradigm of “excess nutrients = bad” that I was simply shocked.